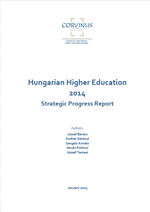 The destiny of Hungarian higher education is an intriguing topic for all because – as many of us would agree – the future of Hungary depends on the present of education. At the beginning of each year when higher education applications are submitted, tens of thousands of families are in agony because they have to make a crucial decision. By then, the central budget has already earmarked the state funds to be spent on higher education in the given year. Higher education institutions are busy recruiting their students: they are organizing open days, placing in advertisements, competing at the Educatio Fair, and politicians also speak up more often on the topic at this time of the year.
The whole of society is concerned with the basic issues of higher education. Is it worth attending higher education institutions in Hungary? Do graduates have any kind of future ahead of them? In which direction is the standard of Hungarian higher education heading? Who pays the costs of education and who should be paying for them: the state, the students or the potential employers? Where do we stand in the international competition? A multitude of questions could follow, about which everybody has an opinion: some form firm and more persuasive views while others less pronounced ones. Ever since its foundation, the Center for International Higher Education Studies (NFKK-CIHES), established in 2008 at Corvinus University of Budapest (CUB), has always considered it to be its mission to take stock – at the beginning of each year in the last week of January – of the previous year and of the trends that were in focus throughout the year before. Since 2009, CIHES has been organizing its yearly conference on “Hungarian Higher Education”, where researchers, university officials, government representatives and foreign experts can share their views on higher education before a steadily growing audience.
Two years ago, CIHES decided to draft a document – in preparation for the conference – on Hungarian higher education with an analogous title. The “Strategic Progress Report” on the year of 2012 focused on six topics on sixteen pages. The authors of the documents, i.e. the leaders of CIHES, were faced with the challenge of how to write about something so briefly: many of the topics could not even be touched upon while we had the impression that academic argumentation was also injured. In harmony with the philosophy of our research centre and in order to make it available for the international public, we published our progress report for 2013 in English as well, covering topics equally relevant on the international level.
Our strategic progress report for 2014 presents higher education on as many as fifty pages, with lots of tables and graphs, and yet, it is still fragmentary. The authors of the study are all members of CUB-CIHES, but not all of them are full-time employees of the university. Since 2014, the research centre has been open to Hungarian and foreign higher education researchers as well. This gives even more variety to our study, which we recommend to all readers interested in higher education. Most likely you will not find every topic which you are interested in or which is present in public discourse. That is exactly why you should attend our conference on 28 January with the subtitle “Waiting for a Shift in Gears…” There you can obtain first-hand information from the competent state secretary about the directions of development for a performance-based higher education.
57 pages
ContentThe publication can be downladed (in English) here.