At Corvinus University, the new academic year will start with high point limits, a new rector and continued transformation.

At a press-release briefing, the university’s management assessed the results of the admission and transformation process so far and outlined the plans for the future.

This year, Corvinus admitted students starting in the autumn with record-high point limits. The university is continuing the transformation it began in 2019, and it seems that the renewed degree programmes and structural changes seem to be delivering: the university’s popularity and the number of applicants are increasing. This year, 2304 students were admitted to Corvinus. The number of applicants to higher education has increased by 11.4 percent nationally, a much higher figure at Corvinus, and the first correct applications have increased by 24 percent.

While average admission point limits have ranged from 435 to 438 over the past four years, putting Corvinus in the top of the felvi.hu rankings, this year the average is 456. Dr. Előd Takáts, the new Rector of the university, talked about how the increase in the point limits fits into his rector programme and the university’s strategy. The new Rector’s goal is to transform Corvinus into an elite regional university, able to compete with American and Western universities and, recalling his personal experience, preparing students for not only domestic but international academic and career opportunities.

He compared his plan to climbing a mountain: although we have already reached a height and are constantly improving, it is time to aim for higher peaks and climb them step by step. The Rector believes that this distance can be covered in roughly 2-6 years, and that experiential learning, research culture change and internationalisation to be of key importance. He believes that elite education at home is essential because it can prevent the brain drain of better foreign universities and help Hungary escape the trap of the middle-income countries.

If we wish an economic and social science elite that is sensitive to the problems of the Hungarian economy and society, it must be educated here,” said Dr. Előd Takáts.

On transformation – what next?

In addition to the degree programmes, tuition fees have also changed. Although there has been a significant increase, this is due to both the inflation-adjusted increase and the foreign language contribution, which was previously a separate item and will be included in tuition fees from this year. The latter does not actually represent a greater burden for students, as the language contribution was previously covered neither by state aid nor by the Corvinus scholarship, since it is now included in the tuition fees, free courses will indeed become free of charge. According to Anthony Radev, President of Corvinus University, the increase in the proportion of fee-paying and self-funded students is minimal and can be attributed to the arrival of many foreign students, who are in the self-financed category. The President said that there are no plans to reduce the proportion of fee-paying students, but the main thing is to make Corvinus a university where it is worth paying, because it is an investment in the future.

We have a dream that every student of outstanding ability with an interest in a social or economic field should apply to the university on felvi as a Corvinus scholarship student in the first place and a Corvinus self-financed student in the second place, said the President. 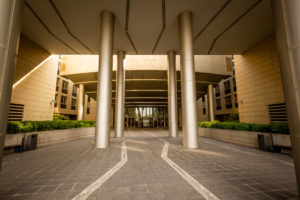 According to Vice-Rector for Education Dr. Lajos Szabó has had a clear strategy since 2019, and the admission point limits are the fruit of this strategy. Internationalisation is a way of attracting foreign students to work and gain experience with the best students in the country. It is also part of the process that more and more English-language courses are starting up and the university is trying to broaden the opportunities abroad – for example, by including a semester abroad in the curriculum, as in the case of the international management degree programme.

The epidemic has not prevented renewal, and innovation has continued, with degree programme development, digitisation, which has even benefited from the move to online teaching, and the development of new degree programmes. The restructuring of degree structures consists, among other things, of providing a more general, comprehensive education in the bachelor’s degree courses and complementing and specialising them in the master’s degree courses. Subjects and methodologies will also be developed on the basis of employers’ expectations of graduates.

Experiential learning is not primarily about students coming out of the classroom happy, but acquiring the joy of discovery, knowledge and learning said the Vice-Rector for Education.

Several new degree programmes and one-year courses are awaiting approval and will be the first of their kind in Hungary, such as Philosophy, Politics and Economics, which combines philosophy, political science and economics, or the Diplomatic Studies degree programme.

The Corvinus Scholarship is also an instrument for progress: since every year students’ eligibility is reviewed on the basis of their performance, those who have received it by default work harder to avoid losing it, and those who were not eligible at the time of admission work hard to get it and study for free.

Among the social science courses, the highest point limits were achieved in International Studies with 467 points and in English with 468 points, and only Corvinus has a point limit above 400 points for Sociology.

Although the number of applicants to Corvinus increased significantly, fewer students were admitted than last year. This is part of the renewal process: to be of international quality, a university needs to have 12-14 students per lecturer, so reducing the number of students admitted is about efficient capacity planning, focused teaching, critical thinking and developing a culture of debate.

The normalisation and reduction of the student-instructor ratio will not only help to make the sessions more personalised, but also to enable the university’s instructors and researchers to re-produce their own human capital, said Dr Lajos Szabó.