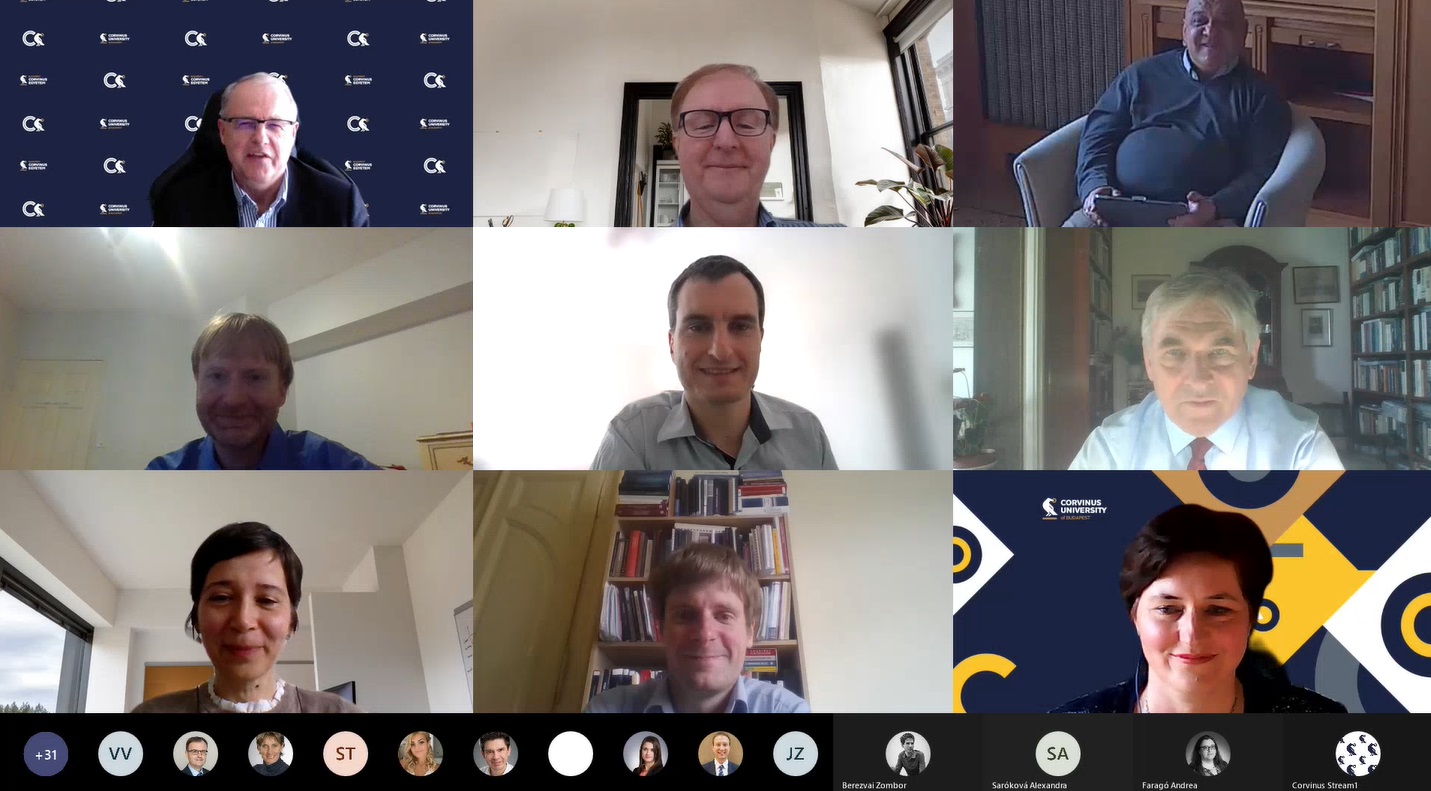 The Corvinus Research Excellence 2021 award ceremony was held online on Thursday, 29 April 2021. The event was attended by an audience of over sixty Faculty and Staff.

The Corvinus Research Excellence 2021 award ceremony was held online on Thursday, 29 April 2021. The event was attended by an audience of over sixty Faculty and Staff.

The CKK-21 award, first announced in December 2020, serves two purposes. On the one hand, it acknowledges and rewards Corvinus Faculty’s recent international research and publication endeavours which are relevant to the University’s strategy. On the other hand, it is meant to motivate Faculty to strive for excellence in published and internationally recognized research results. We believe that CUB’s increased academic excellence and visibility will, eventually, improve its position in international university rankings.

In total, 52 valid applications were submitted, 10 PhD by Students, 10 by Early-Career Faculty and 32 by Senior Faculty. The applicants’ publication output of the past three years was thoroughly examined. First, scores were assigned to every item according to the CKK evaluation methodology guidelines, and then the Evaluation Committee discussed the applications taking all relevant contextual factors into consideration. This two-step evaluation process ensures that the award goes to the most remarkable applicants. Based on the Committee’s decision, nearly two-thirds of the applicants (to be exact, 63.5%) were granted the CKK-21 award. This included 6 PhD students, 8 Early-Career and 19 Senior Faculty. The total prize distributed among the winners exceeded 80,000,000 HUF. The names of the award winners are listed below, and the details of the evaluation process are found in the Evaluation Committee’s Report.

The online award ceremony was hosted by Professor Dr Gyula Vastag, Pro-Rector for Research and Chair of the Evaluation Committee, and was attended by Dr Anthony Radev, President of CUB. Members of the Evaluation Committee, Professor Dr Bart MacCarthy (Nottingham University Business School), Professor Dr Tamás Magyarics (School of English and American Studies, ELTE) and Professor Dr Gabor Virag (Department of Management, University of Toronto) were also present and briefly summarised their experience regarding the award in general and the factors considered in the evaluation process. They praised the winners for their work and drew the audience’s attention to those publications which can be considered outstanding by international standards as well. Professor Virag talked about research excellence and underlined the importance of having a research and publication strategy for all academics. Professor Magyarics congratulated the University on this unique initiative to reward research excellence and expressed his satisfaction regarding the variety of topics discussed in the various high-quality publications. Professor MacCarthy discussed the challenges of publishing in top international journals as a result of increased competition in the field. He encouraged the audience to grab all research and publication opportunities as they present themselves at various stages in their career.

After the awards were announced, representatives of the three award categories (Zombor Berezvai and Tamás Dudlák (PhD students), Balázs Róbert Sziklai (Early-Career Faculty), Tamara Keszey and Réka Benczes (Senior Faculty) expressed their delight at receiving the award and spoke about their personal research experience. The awardees took the opportunity to thank their colleagues and family for their backing and expressed their delight in Corvinus University acknowledging and rewarding excellence. They emphasised that academic freedom and creativity go hand in hand and research success is only possible in a supportive academic community.

In his closing remarks, Professor Dr Gyula Vastag underlined that the Corvinus Research Excellence award is not only important to the University but also to the individual researchers as it acts as an incentive for excellence in work and an encouragement to rise to international challenges. As he put it: “our goal is to help you to become the best researcher you can be.” He also expressed his hope that the next, 2022 Corvinus Research Excellence award, to be announced at the end of the year using the experience of the first call, will draw an even higher number of applications.

The following Faculty were granted the first Corvinus Research Excellence award in 2021:

The official certificate and the engraved glass award designed to make this achievement even more memorable can be picked up from the Research Management Office in E.203 during business hours: Monday-Thursday 9:00-15:00 Friday: 9:00-13:00. The award will be transferred to the winners’ accounts in May.