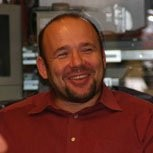 JánosMogyorósi graduated from the Kálmán Kandó College of Engineering from itsdigital process control program in 1988. Besides his studies and after hisgraduation, he worked as programmer for five years at SZÁMALK, the MechanicalIndustry Research Institute (MIKI) and at the Central Research Institute forPhysics (KFKI).

He joined ELTE in1993, where he was responsible for the development of its network services. Inthe meantime, he also provided support for the similar efforts of the legalpredecessor of Corvinus, and lead an initiative by three of the biggestHungarian universities (ELTE, BME, and Közgáz, the predecessor of Corvinus)with the aim of creating a heavy-duty cluster for calculations.

In 1994, he joinedOptotrans Kft., which became the biggest network development company ofHungary, as the Hungarian partner of Cisco, Inc. As a result of rapiddevelopment possibilities, the increasing utilization of external capital andacquisitions in the industry, the company later became SYNERGON, and Mogyorósihas become its Deputy CEO in 1996.

At SYNERGON, JánosMogyorósi was responsible for the telecommunications and finance areas of thecompany. Between 1998 and 2000, he was the CEO of Integra Zrt., a member of theSYNERGON group focusing on the development of banking and finance softwares. Asmember of the company’s management, he took part in the management of thecompany’s IPO, which happened at the same time both at the Budapest and LondonStock Exchange in 1999. Meanwhile, he started an MBA program at the legalpredecessor of Corvinus, however, he never finished his studies here. Heremained member of the board of SYNERGON until 2002.

In 2005, Microsoftelected him as a board member of its Higher Education Advisory Board. Beyondhis efforts as leader of the University’s IT services department, he ledseveral R&D projects in cooperation with the service development of MagyarTelekom, until 2015.

Imagine what wouldhappen, if suddenly, all computers, IT systems and cellphones disappeared fromour world. The flow of information, that moves our economy, or energy systems,the goods and raw materials would stop immediately. Even if that wouldn’t mean theend of human civilization, our possibilities, our cultural, economic and socialconnections would change so drastically that we would have to completelyreimagine our existence and capabilities. Those ubiquitous IT solutions, thestock exchanges, banking systems, news outlets, Google, Facebook, Instagram andeven the University’s IT systems, are neurons of what we could consider theglobal human mind, our common ecosystem.

Early on in my career,I took part in the creation of the first (or one of the first) internetconnection in Hungary, between the Central Research Institute for Physics andthe Swiss Institute for Nuclear Research, and frankly, I didn’t think that thisprocess, that was just getting started in Hungary, would one day became soembedded in our everyday lives, and the understanding and development of theinformation technologies would be one day be the catalyst of our world.

I consider myselflucky, because I was (and still am) able to participate in numerous Hungarianand international projects. Among these were: building a company, an IPO,technological research, and service development. Throughout these years ofworking, managing projects and researching, a feeling grow inside of me: A teamis a must! – That’s something I completely agree on with Patrick Lencioni, orDezső Garas.

At Corvinus, for 20years (it seems a lot even written down!) I’ve been working with people, whoseprofessional preparedness and attitude I completely trust, that I can rely on,and who can count on me. Providing IT services to the next generation, studentson the verge of entering a global labor market in a globalized word is a greatthing. That’s why we’re doing it!