Milestone in the transformation of Corvinus University

Prof. Dr. László Palkovics, currently in charge of funding, Minister for Innovation and Technology announced at the Corvinus management briefing and then at a press conference that he would submit the Deed of Foundation of the Maecenas Universitatis Corvini (MUC) Foundation to the court.   At the event, the Minister presented the future members of the Foundation's governing bodies. The Minister asked Zsolt Hernádi, Chairman and CEO of MOL Plc., to chair the Board of Trustees. Other members of the board of trustees: János Csák, businessman, titular university professor; András Lánczi, Rector of Corvinus; János Martonyi, lawyer, university professor, former Minister of Foreign Affairs; Dániel Palotai, Executive Director of the MNB. The Chairman of the Supervisory Board will be Béla Bártfai, a lawyer, CEO of the Hungarian Hydrocarbon Stockpiling Association, and Attila Chikán, Professor Emeritus of the Corvinus University of Budapest, former Rector, former Minister of Economy, and Levente Jánoskuti, McKinsey and Company office managing partner. Attorney-at-law Tibor Bogdán will be the trustee of the Foundation.

Minister of Innovation and Technology, László Palkovics, informed the University management, members of the Senate and the invited guests; members of the consistory and former rectors about another important milestone in the change of model of our University. Following the private briefing, the Minister, Rector András Lánczi and Zsolt Hernádi, the invited Chairman of the Board of Trustees of the Maecenas Universitatis Corvini Foundation, spoke to the press about the developments at the Corvinus Faculty Club.

Based on the proposal of the Government, Parliament passed in spring the legal regulations that created the framework for the operation of the Corvinus University of Budapest in a new, foundation form from 1 July 2019. The Deed of Foundation of the Maecenas Universitatis Corvini Foundation has been completed, so after the registration of the Foundation, Corvinus will be able to continue its activities in a renewed model - said László Palkovics. The legal preparatory process for the renewal of the university's operating and maintenance model has reached its final stage with the submission of the deed of foundation, the minister pointed out.

The deed of foundation of the trust fund contains the purpose, activities, initial assets of the Foundation, as well as the membership of its management and control bodies. The members of the five-member board of trustees were invited to their positions by the head of the ministry as a representative of the Government acting on behalf of the founding Hungarian State, which they all accepted. The chairman of the board will be Zsolt Hernádi, Chairman and CEO of MOL Nyrt., invited members: János Csák, businessman, titular university professor; András Lánczi, current rector of Corvinus University; János Martonyi lawyer, university professor, former Minister of Foreign Affairs; Dániel Palotai, Executive Director of the MNB.

In addition to the board of trustees, there will be a three-member supervisory board, and the deed of foundation provides for the position of the trustee, which will be filled by a person elected for 9 years and will supervise the legality of the Foundation's financial management. The Chairman of the Supervisory Board is Béla Bártfai, a lawyer, CEO of the Hungarian Hydrocarbon Stockpiling Association, and the members are Attila Chikán, Professor Emeritus of the Corvinus University of Budapest, former Rector, former Minister of Economy and Levente Jánoskuti, Office Managing Partner of McKinsey and Company. Attorney-at-law Tibor Bogdán will be the trustee of the Foundation.

Rector András Lánczi, who will also play a role in the management of the renewed Corvinus in the future, reminded: this year's admission results also prove the popularity of Corvinus, the prestige of the university is unquestionable. However, for further development, to achieve world standards, the model change was inevitable. András Lánczi stated: “in the process of the renewal of Corvinus, our principles are: demanding and performance. Along these lines, we started the internal, professional work in the second half of last year, in which about 120 colleagues participate intensively ”. As he said: "the change of model of Corvinus University is a national enterprise, which will bring significant benefits to students, lecturers, researchers and indirectly to the Hungarian economy and society".

The Minister asked Zsolt Hernádi to lead the board of trustees of the Foundation, which exercises the funding rights. MOL's Chairman and CEO said that participating in such a process is a serious challenge, responsibility and opportunity. MOL is a Hungarian-based multinational company with a presence in nearly 40 countries, which is committed to strengthening Hungary's competitiveness. MOL has therefore been at the forefront of supporting domestic education and new graduate talents for decades. As an example, he mentioned MOL's Groww program, launched in 2007, which has so far provided competitive jobs to 2,100 career starters since 2007, 80 percent of whom still work for the company. A few years ago, SEEDmanagement training was launched, with 500 applicants from 22 countries applying for it so far. They also have dual training cooperation with 3 universities, and in the framework of strategic partnerships, MOL has spent billions of forints in recent years to support Hungarian higher education.

According to Zsolt Hernádi, the trend of recent years is that more and more Hungarian young people are choosing higher education abroad. In 2017, this number increased by 12% compared to the previous year. The invited chairman of the board of trustees highlighted that just as universities compete for talented students, companies also compete for professionally highly qualified new graduates. It is in the common interest of Hungary's academic and business sectors to keep the most talented people at home. As he said: this can only be achieved if higher education that is competitive with the world's leading institutions is available in Hungary as well.

According to him, changing the model of Corvinus is nothing more than investing in the future.  It is time to increase Corvinus' international recognition by taking advantage of previously neglected professional opportunities.

Board of Trustees of the Maecenas Universitatis Corvini Foundation

Economist, businessman, Chairman and CEO of MOL Hungarian Oil and Gas Nyrt., Member of the National Competitiveness Council. He previously held the position of CEO of Magyar Takarékszövetkezeti Bank. Former student and honorary citizen of the Corvinus University of Budapest, an honorary university professor, and an alumnus of the Rajk László College for Advanced Studies. As Chairman and CEO of MOL Nyrt., he is committed to supporting higher education.

Economist, businessman, translator, chairman and co-owner of Design Terminal and Brain Bar, chairman of Arete Zrt., member of the board of Richter Plc. And Bank of China Hungary. Co-president of the Hungarian-Slovak Chamber of Commerce, founder of Széll Kálmán Foundation, member of the Supervisory Board of the St. Francis of Deva Foundation. He previously served as Chairman of MOL and Westel. Between 2011 and 2014, he was Hungary's ambassador to the United Kingdom. He was a former student and is a titular university professor of the Corvinus University of Budapest and, as the head of the advisory board of the Corvinus Renewal Project, he took an active role in the professional preparation of the transformation.

Philosopher, political scientist, university professor, rector of the Corvinus University of Budapest, president of the Center for European Renewal. Previously he was the head of the Institute of Political Sciencse at the Corvinus University of Budapest and the chairman of the Board of Trustees of Századvég Foundation, and a visiting researcher at the Eric Voegelin Institute at Louisiana State University as a Fulbright Scholarship holder. He also worked at the Department of Economics and Law and as a member of the Political Science Committee of the Hungarian Academy of Sciences and as a member of the Committee of Social Sciences of the Hungarian Accreditation Committee.

Legal scientist, lawyer, university professor, professor emeritus of the University of Szeged. Between 1998-2002 and 2010-2014 he was the Minister of Foreign Affairs of Hungary. He has been publishing studies and essays on international relations, competition policy and competition law, European integration and Community (European) law, as well as global regulations and Central European cooperation for decades.

Economist, Executive Director, Chief Economist of the Magyar Nemzeti Bank responsible for economics and priority affairs. Vice-President of the Hungarian Economic Association. He is a member of the Monetary Policy Committee of the European Central Bank and of the Economic and Financial Committee of the European Union. He is a lecturer and former student of the Corvinus University of Budapest. Previously he headed the Macroeconomic Department of the Ministry of National Economy.

Supervisory Board of the Maecenas Universitatis Corvini Foundation

Lawyer, CEO of the Hungarian Hydrocarbon Stockpiling Association. He previously served as Deputy State Secretary at the Ministry of Justice, Judge at the Supreme Court, President of the Chamber, State Secretary at the Prime Minister's Office and the Ministry of Finance, and Chairman and CEO of the Fundamenta Magyar-Német Lakástakarékpénztár. His publications were in the field of finance and tax law.

Economist, Professor Emeritus of the Corvinus University of Budapest and Director of the Competitiveness Research Center, full member of the Hungarian Academy of Sciences, external member of the Royal Swedish Academy of Engineering. President and founding director of Rajk László College for Advanced Studies. Previously he was the rector of the Budapest University of Economics and Public Administration and the Minister of Economy.

Economist, McKinsey and Company office managing partner, member of the National Competitiveness Council. He is a former student of the Corvinus University of Budapest, an alumnus of the Universität Passau and the London Business School. 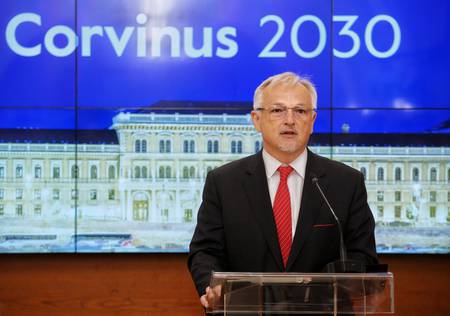